Disparities in Wealth and Development Essay

The United States of America is the third world’s largest country. From the geographical point of view, the country lies in a number of time zones, the climate changes gradually from North to South, and the nature represents a full diversity of landscapes and living creatures.

Due to anthropogenic activity, the US is also the third world’s most populated country for that it unites around 320 million people within its borders. The administrative division of the country is represented by 50 states, each different in all of the aforementioned characteristics. It is worth mentioning that the relation of geographic and economic factors helps to measure the income levels in each part of the country and analyze the population census. Using a relevant statistical measure called the Gini Index, it would be possible to track the inequality of wealth and development distribution between the country regions by the level of urbanization and industrialization.

In the last five years, the Gini Index of the United States has not significantly changed from 0.45 to 0.469, U.S. Census Bureau reports. However, The Associated Press claims that in the last years the USA reached the critical inequality levels in comparison to previous decades. The measures of Gini Index originally lie between the values of 0 and 1, where a value of 0 represents total equality of wealth and a value of 1 absolute inequality. Therefore, the disparity of income in the core regions and periphery of the United States seems to be more or less balanced in terms of the whole nation but tending rather to equality even with the slight changes in the opposite direction. 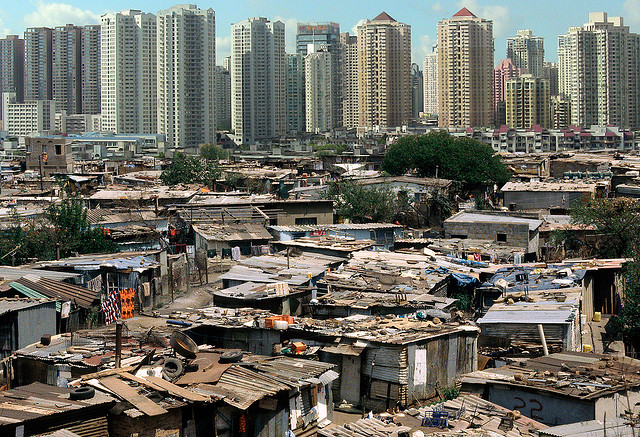 Let us now take a closer look at the situation within the states and regions of the country. I would divide the states into several groups to identify the range of index amplitude for each group more specifically.

The less inequality is found in the states with the least amount of population. Most of these regions are rural and composed of comparatively small cities and towns. Utah, Alaska, Wyoming, Idaho, Iowa and some others fall under the categorization of being most rural areas as well as the areas of least inequality distribution not more than 0.43. Most of the states also lie in the same climatic zone, which serves as a generalizing characteristic. With the similar natural conditions and income sources, the living conditions of the population in these states are approximately the same.

Both South and North Dakota, Montana and around ten states more, most of which are in the Northern and Central US, seem to have more obvious inequality distribution 0.43-0.44 on average. The regions are characterized mostly by plain areas where farming is a habitual activity.

Nevertheless, with the increase in older population, migration and development of industrial spheres, the income distribution has been changing over the years producing less balanced image in the given states.

Obvious disparity in wealth and development between the core and periphery regions in the USA is certainly found in the states, which are situated next to the border with Mexico and closer to the Atlantic Ocean. The Southern part of the USA is characterized by the country’s most populated rural areas like Kentucky, Georgia, Florida, Arkansas and some others. However, the density of population in these states is not as high as in the Northern and Central parts of the country. With an unequal distribution of rural and urban population, where urban population comprises the minority, the gap between the incomes in agriculture and non-agricultural spheres is quite noticeable and is evaluated at the level of 0.46-0.47. Besides, the Southern part of the United States is the zone with the dominant number of emigrants from Mexico and other neighbouring countries. These are usually the people who work illegally and earn considerably less than an average American. Including all these people in the statistics would most probably shape it even more sharply.

According to The Associated Press, the states like New York, Connecticut and Texas are those with the highest wealth inequality in terms of the Gini Index. In 2010, U.S. Census Bureau has identified New York’s measure of inequality at the level of 0.499. At the same time, New York is known for being one of the biggest rural population zones in the United States. However, the rural population is only a small part of the whole area’s population due to the fact that New York City and its metropolitan area together numbers six times more inhabitants than the whole rural population in the state. Nevertheless, the rural population is not always involved in agricultural and farming activities the inhabitants of smaller towns can still work in New York and make everyday commutes back and forth.

In conclusion, I would like to mention that the disparities in wealth and development between the core and periphery regions of the United States are predetermined not only by economical factors. Natural conditions and social preferences play an important role in the way how people perceive their wealth within the community measures. Being a unique country in terms of natural resources and political system, US has the highest level of disparity among the developed countries in the world.