The two are stunned with how recklessly someone just left her. Clearly, this murder was not treated with equal justice because the murderer, Clarence, a white man only spent a small amount of time in prison and returned to the reservation without restorative justice working. He came back a hero to his white friends and acted as if he were superior to the Native Americans because he only got a small sentence for the murder.

The Native American community was stunned by the lack of justice for the murder of Little Margaret and even brought in a Native American activist, Hobart, from Montana to talk about how unjust the punishment was for the crime that was committed. Hobart was treated as if he were a criminal rather than a Native American trying to seek justice. He was followed by white Federal law officers under the premise that he may start some sort of revolt or riot because of the unjust sentence that was imposed on Clarence for murdering Little Margaret. 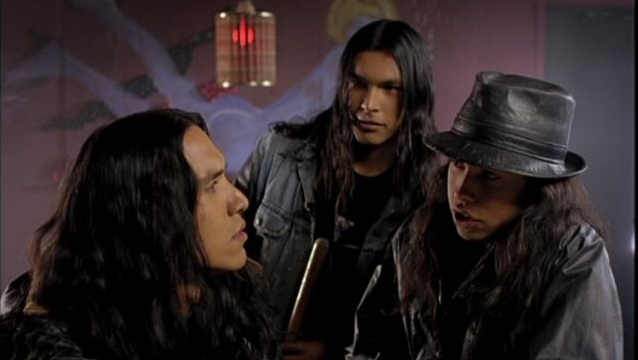 Reversing the roles, if it had been a white person that was the murder victim and a Native American was convicted of the murder, the sentence would be much harsher, at least 20 years to life in prison rather than the short sentence that Clarence served for the murder of Little Margaret. There is definitely reverse bias in this situation. Throughout the film, the Native American’s “take care of their own” from the dilemma of a Native American girl going off and marrying a white man and then is unable to get pregnant by her white husband to the Hammurabi’s Laws eing carried out within the Native American community to revenge Little Margaret’s death. Through these situations, they speak very little about the consequences and take action to do what needs to be done. The plans were set in place and the parts were played by each Native American, from getting Illiana pregnant by Gooch, her ex-boyfriend, to taking her white husband out and distracting him to make the plan work as well as the group carrying out a plan to kill Clarence for the murder of Little Margaret.

Intuitively, the night that the group of Native American men were going to revenge Little Margaret’s death and kill Clarence, the Native American women were so in tune with what was happening even though there were not a part of the planning that one of the Native American women, Sadie, Silas’ girlfriend, takes it upon herself to kill Clarence before Silas does because she knows that if Silas kills Clarence, he will not be able to fulfill his dreams of becoming a mechanic and would spend his life in jail. She knew that if she killed him, she would not be a suspect and Silas would have an alibi.

Upon Clarence’s murder, the entire group of Native American friends was taken to the police station for questioning. During their time at the police station, the white officers degraded them and made them feel less than human. They were made to strip down to their boxer shorts and were treated poorly because they were Native American. Fortunately for all of them, they stuck together and could not be implicated in Clarence’s murder and were let go. They did not receive their clothes back; they were driven in their boxer shorts out to the reservation and left like trash.

Thankfully a Native American drove them back to their community, once again, taking care of their own. Once back to their community, Silas went to Sadie’s house to speak the unspoken and let her know that what she did was selfless and he was grateful. She had given Silas the opportunity to do something great with his life and go to school rather than spending his life in prison. This was an excellent portrayal of Native American’s taking care of their own as well as Hammurabi’s laws in action, “An eye for an eye, and a tooth for a tooth. ”

Throughout this video, I was able to see that a life is not valued equally among Native American and white cultures. You can see the inequalities blatantly throughout the movie, not only in the murder of Little Margaret but even in the way that whites and Native Americans are treated even in their own communities. It is a sad and gross reality but truth be told, westernization has been a huge force behind the way that lives and values placed upon them are viewed. A white person’s life is valued more so than a Native American’s, this is not justice.