Title is French- The Language of Love

Title translates to: ‘The Beautiful Woman Without Mercy/Pity. ’The woman in the poem speaks French and that’s why the knight misunderstands her. The poem has a circular structure, repetition of the first knights’ words at the beginning and end of the poem. The first and last stanzas are almost identical.

Lots of lines are repeated throughout. Title taken from a medieval poem, romanticism celebrated medievalism and its traditions. Written in the form of a Literary Ballad: Tells the story in a simple way, similar to a song or folk ballad, (embracing traditions).La Belle Dame Sans Merci This is the first speaker as he is talking about another knight, asking rhetorical questions.

I The first and second stanzas contain anxiety and uncertainty of the first speaker and foreshadow the pain and trouble that will come to the second speaker No birds singing is a metaphor for there being no life around or no life for the knight ‘Ail’ means bringing someone down through pain or trouble. This foreshadows the discomfort the second knight will experience later in the poem. Oh what can ail thee, knight-at-arms, Alone and palely loitering?The sedge has withered from the lake, And no birds sing.

II We would think a ‘knight-at-arms’ as a muscular and strong hero. However the hero is portrayed to be ‘haggard’. This is a derogatory term for a woman being used for a man, ‘Haggard old woman’. Pathetic Fallacy is used to set a dull mood. Binary Opposite: Winter, (when the harvest’s done), is cold in comparison to the sunshine that a knight would bring. This could also be a metaphor for the fact that the knight is food for the woman, so he gives her power.

Oh what can ail thee, knight-at-arms, So haggard and so woe-begone? 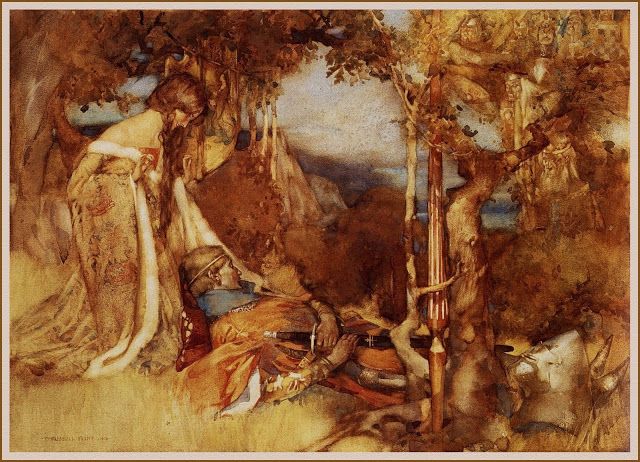 The squirrel’s granary is full, And the harvest’s done. Imagery of Nature is used to create a somber mood and tension in the atmosphere: Lilies are associated with funerals and death and fading roses with illness and death but nature usually has positive connotations. III Negative connotations of nature: ‘anguish moist’ and ‘fast withereth too’ suggests a change in the woman or change in the power of nature. Quatrains: Regular four line stanzas for clarity could be seen as a representation of the woman’s power and stability. I see a lily on thy brow, With anguish moist and fever-dew,And on thy cheeks a fading rose Fast withereth too.

The Imaginative description and comparison of mythical characters suggests that this woman is not genuine, she may not be real as ‘a faery’s child’ would be a figment of the imagination and ‘her foot was light’ so she’s not down to earth. IV Meads are meadows or forests. Highlights dream elements of beauty and nature. ‘Wild’ eyes suggest the power of forces of nature and so suggest the beautiful woman is not trustworthy.

I met a lady in the meads, Full beautiful – a faery’s child, Her hair was long, her foot was light, And her eyes were wild.The idea of the knight making the woman a garland a bracelets suggests that he is adding to the power of nature and is causing his own failure while trying to bring himself happiness. Assonance: The repetition of vowels could represent a spell being cast on the knight by the woman. V Sexual Imagery: Used to show the intentions of the knight and the extent of his foolishness after several warnings of danger. Rhyming: The second and last line of every stanza rhyme, (ABCB), adds an element of repetition and reinforcement of Keats’ message to both the speakers and the reader. I made a garland for her head,And bracelets too, and fragrant zone; She looked at me as she did love, And made sweet moan. VI A ‘pacing steed’ is a horse. This shows how he is trying to impress her and please her with power that he doesn’t hold.

Dreamy Imagery of mythical characters: ‘A faery’s song’, portrays the ideas of idealism and individuality in the Romantic Movement and shows how persuasive this woman is. This also introduces the reader to the idea of a language barrier between the knight and the woman. The woman has blinded the knight with her beauty and her use of power, to him she is supernatural.I set her on my pacing steed, And nothing else saw all day long, For sidelong would she bend, and sing A faery’s song. Each stanza is labelled with roman numerals which the helps the story of the poem to be understood easily and adds the element of structure that goes with the woman’s taming and deception, like she has it all planned out. The third to the eighth stanza of the poem are emotional and intense.

They describe the knight and women’s meeting and mystify the attraction that appears to develop between them. There are also semantic fields of nature and imagination in these stanzas.Alliteration is used to emphasise the meaning the relish, it could be poison for the knight. The fact that she gives him ‘relish sweet’, ‘honey wild’ and ‘manna-dew’ suggests that maybe she is overdosing the knight with her power and her supernatural forces.

VII An ‘elfin grot’ would be a small hidden secretive place, maybe a cave for the woman. Whereas, normally, a fairy would have a grotto as her home place. This means the knight is being deceived; the woman could be a monster or witch if she lives in a cave.

The woman obviously speaks French, the language of love which is the ‘language strange’.The knight misreads the signals and misunderstands the language but he doesn’t think he’s wrong. She found me roots of relish sweet, And honey wild, and manna-dew, And sure in language strange she said – ‘I love thee true’. VIII Metaphor: ‘…she lulled me asleep. ’ This is metaphorical as it suggests that the knight has been lulled into a false sense of security which allows Keats to express his feelings on values and beliefs in society. Semantic Fields of love and nature and the repetition of ‘wild’: They help to portray the slight concern of the knight.Dreamy imagery comes to life for the knight when he realises that this is all fake and the woman is a myth. He has been tamed through deception.

The woman is still deceiving the knight and she looks innocent through crying, the knight still thinks that he has power over her and continues to love her all the same. She took me to her elfin grot, And there she wept and sighed full sore, And there I shut her wild wild eyes With kisses four. IX In his dream, the knight dreams about his fellow aristocrats being deceived by the same woman.This allows Keats to express his rejection of aristocratic patronage. ‘On the Cold Hill Side’ suggests the loneliness and isolation of the knight as he has been deceived. Negative connotations of love are used. And there she lulled me asleep And there I dreamed – Ah! woe betide! – The latest dream I ever dreamt On the cold hill side. Again towards the end of the poem, heroes are portrayed to be weak, ‘pale kings and princes’ and ‘pale warriors’ which would not normally be associated with the concepts of illness, death and the draining of power.

XII The final stanza of the poem completes the circle of the story and acts as a conclusion to the end of the story containing mystery and ambiguity as the first and last stanzas of the poem are almost identical. Circular Structure/Repetition: The last line of the poem ‘And no birds sing tells the reader that the knight has returned back to the original state that he was at the start of the poem where there is no life around. Old Language: ‘sojourn’ Keats use of old language adds an element of mystery and supports the mythical themes in the poem.Mythology is a common theme in poems from the era of romanticism. In the final stanza the second knight answers the first knight’s questions with a matter of fact. ‘And this is why I sojourn here’.

With this Keats shows his reader that the knight has not changed, he is staying as he is: he was powerless at the beginning and is at the end. It was the woman who gave him what he thought was his power. And this is why I sojourn here Alone and palely loitering, Though the sedge is withered from the lake, And no birds sing.