It could also refer to the refusal of commercial interests to support Yeats’ appeal for money to build an art gallery to house the Lane Collection. Yeats makes explicit links between his political and cultural concerns. I believe that by ‘Romantic Ireland’ Yeats meant an Ireland that is not dominated by power and money. A critic wrote of Yeats that “For him ‘Romantic Ireland’ meant that large-minded attitude beyond the mere calculation of economic or political advantage that he saw in the present,” This attitude for Yeats was incarnated in his sometime Fenian mentor John O’Leary. 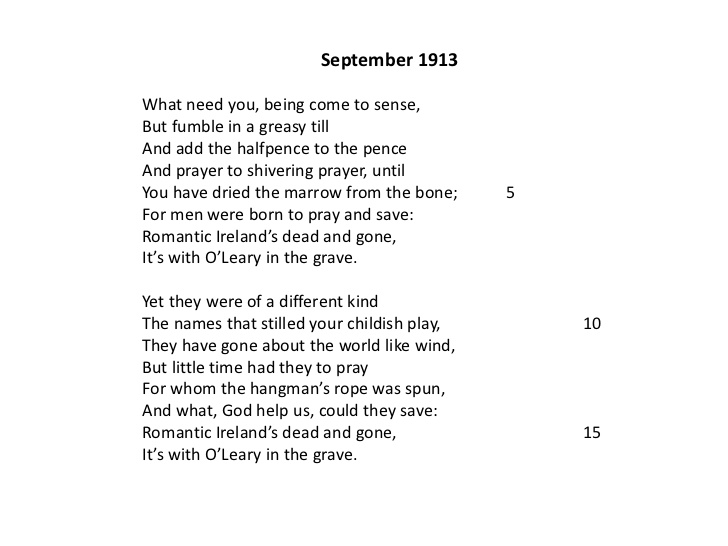 John O’Leary (1830-1907) a dignified and well-read man represented Yeats’ vision of the ideal romantic nationalist. He was a Fenian who introduced Yeats to Irish writing in translation and also taught him that “there is no fine nationality without literature, and… the converse also, that there is no fine literature without nationality,” The first stanza of ‘September 1913’ focuses on the pursuit of money. “But fumble in a greasy till. And add the halfpence to the pence. Yeats is talking about the employers in their relentless pursuit of money, and how they are petty for being interested in such a small amount of money. This creates an image of Ireland that is negative, where Ireland is dominated by power and greed. This use of imagery reinforces Yeats’ point that “Romantic Irelands dead and gone”. Yeats then links money to religion and how their beliefs are a false front, “And prayer to shivering prayer,” Prayer should be warm if genuine, so use of the word “shivering” implies that they are doing it out of fear, or perhaps even desperation to further their own gain and wealth.

The last two lines are the first time we see use of the word Romantic, “Romantic Irelands dead and gone, Its with O’Leary in the grave. ” Yeats strongly believed in Irish culture and folklore and here he admits that they have been lost in the minds of the people. The second stanza immediately changes tone, becoming retrospective. “Yet they were of a different kind, The names that stilled your childish play,” Yeats believes that merchants have forgotten their origins, as if they are playing pretend just as children do.

Yeats then writes how Irish Patriots have become known around the world, “They have gone about the world like wind,” Yeats could also mean that even thought they are dead and buried, their beliefs and messages are still remembered by people around the world, and also in Ireland. Yeats foreshadows the death of the Patriots, which is the focus of the next stanza. “For whom the hangman’s rope was spun,” Using the words “hangman’s rope” creates a strong visual image of death and sacrifice.

This use of imagery is to remind the people of Ireland what was sacrificed in an attempt to resurrect Romantic Ireland. Yeats the bitterly comments on what the Patriots achieved, that their sacrifice was possibly in vain. “And what, God help us, could they save? ” At the beginning of the third stanza, Yeats mentions the Irish soldiers. “Was it for this the wild geese spread” After the penal Laws of 1691 prevented many Irishmen serving in the British Army, Irish soldiers known as ‘Wild Geese’ served abroad in European Armies.

Yeats then directly mentions the Irish Patriots. “For this that all that blood was shed, For this that Edward Fitzgerald died, and Robert Emmet and Wolfe Tone,” This is important to the presentation of Romantic in the poem, as Yeats would have seen the Patriots as a symbol of free Ireland, and therefore a symbol of Romantic Ireland. Yeats implies madness and idealism in the next line, suggesting that the Patriots were blinded by their ideals, “All that delirium of the brave? In the final stanza Yeats is regretful, that even though people laid down their lives, nothing was achieved. “They weighed so lightly what they gave” This refers to how people, such as the Irish Patriots Yeats saw as a symbol of Romantic Ireland, saw their lives as nothing compared to what they fought for.

Overall Yeats presents the Romantic as gone, and that all the efforts were wasted and useless. He continues this through the first three stanzas, but then almost seems to change his mind in the last stanza. But let them be, they’re dead and gone, They’re with O’Leary in the grave. ” It is as if Yeats is saying that even though the Patriots themselves are dead, their beliefs and ideals can be picked up and continued by a new generation of heroes. However it can also be said that Yeats has given up, after seeing how much was given to achieve so little, and that he believes that Romantic Ireland is truly lost and that there is no way to bring it back.